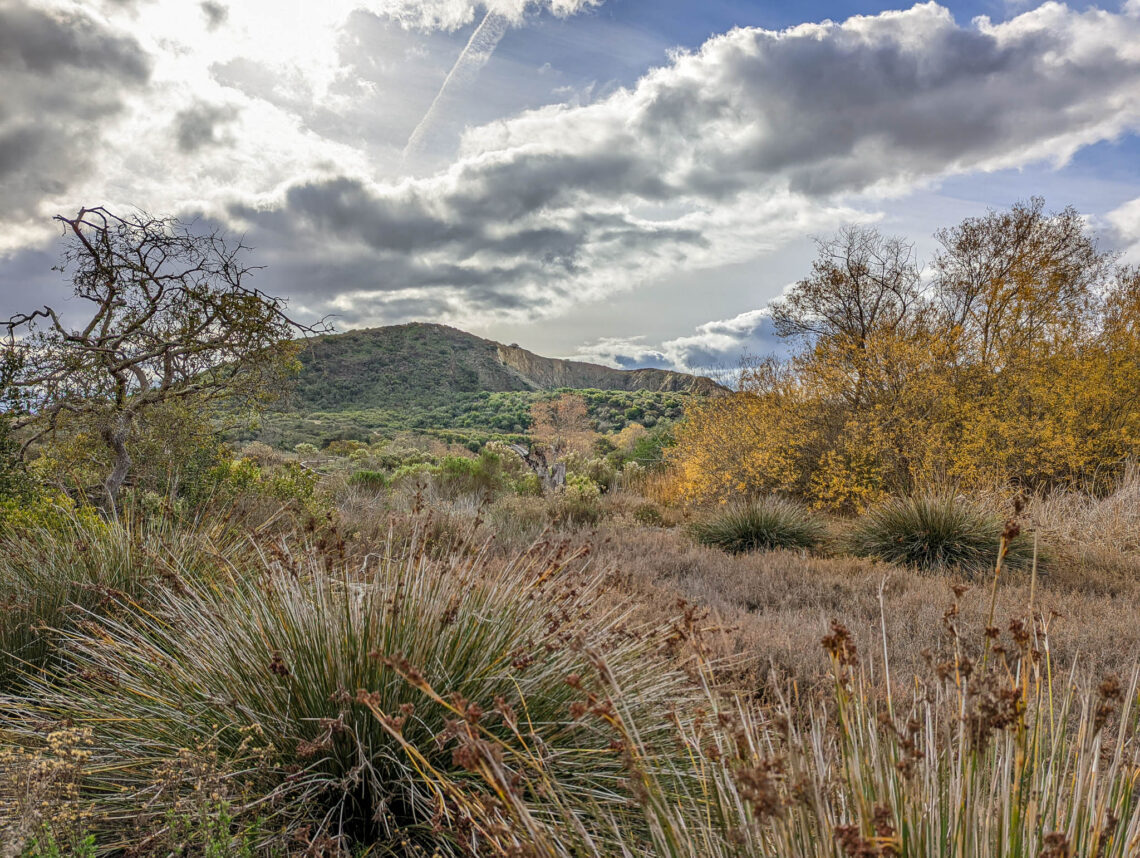 Home to the man-made Lake Calavera and close to 6 miles of hiking/biking trails, Lake Calavera Preserve near Carlsbad was our choice for the second hike of 2022! Alex and I were enticed by the convenient location of Lake Calavera as we had a busy weekend planned in the nearby area. Just East of College Boulevard, the preserve is a little nature oasis in the middle of the city!

While the vast majority of people are drawn by the flat and easy paths meandering along the peaceful lake waters, our first stop was the incredible Mount Calavera rising 516 feet above the namesake lake. After we had conquered the “peak”, we decided to keep on exploring and followed the path to do a full loop along the lake as well. We spent approximately 1 hour and a half in the preserve and tracked 2.5 miles. To make it easier, I am going to separate Mount Calavera as one trail and Lake Calavera as another, even though they are connected through numerous little paths. Keep reading to learn more about each section of this beautiful preserve!

Disclosure: Some of the links in this article are affiliate ones. If you purchase through these links, I may earn a small commission at no additional cost to you.

Mount Calavera is actually an extinct volcano which is believed to have erupted close to 20 million years ago! It is also the smallest volcano in Northern America and the only one in the San Diego area! Isn’t that good enough of a reason to add it to your travel itinerary?!

We decided to take the trailhead starting just off Tamarack Avenue. This is a good option if you want to climb the top first, however, keep in mind there is no parking lot on the West Side of the preserve. Fret not – there is plenty of parking along the street. Be warned though that due to being such a popular destination, the street parking can fill up (especially on weekends and other popular times!). As always, I highly suggest an earlier start to your day!

From the street, a wide, paved walkway takes you down to the bottom of the lake, before a choice presents itself to you: Left, Straight, and Right. Left takes you around the lake, Straight takes you around the other side of the lake towards Mount Calavera, and Right takes you away to the right. Keep straight and hike up on the steady ascent until you are greeted by the remarkable view of the volcano before your eyes! We were standing at the bottom of Mount Calavera’s Caldera as the sun was glimmering just above the cliffs. Be sure to take a few moments to admire the scenery before you continue along the path to your right.

A relatively easy flat path marks the next section of the trail. If you are up for a little adventure, you can take the second little walkway to the left immediately after you have passed the caldera. We missed it on the way up, but we found that path on the way back down. Have in mind that this is a narrow path which will take you along the rim of the cliffs.

We kept looking to our left to find a small walkway through the bushes. While there are quite a large number of paths you can take, some had dead-ends while others were significantly eroded. You can definitely continue along the main path for a longer, easier ascent or you can explore on your own as you are making it up the hill!

Regardless of which option you choose, you will find yourself on the wide-open crest opening up to panoramic views on both sides of the hill. The section that follows is not difficult, but if you do not have much hiking experience you might find yourself out of breath as you are slowly but steadily climbing closer and closer to the peak. The interchange between smooth rocks in shades of brown and red and the rugged dirt path in this part of the trail was quite extraordinary to witness.

The trail keeps splitting every now and then, so you will be standing at a few different intersections. There is no official trail and also no way to really get lost. Follow your intuition and just make sure that you keep heading towards the peak! In between choosing which path to explore and enjoy the beautiful scenery, you will reach Mount Calavera before you know it!

Many people would stop here and take the same way back down once they have taken the necessary selfies. The real adventure and the best part about hiking all the way to the top starts once you have actually reached the peak. You would need to follow the little path, taking you downhill in the opposite direction that you came from. Only a few steps are needed to make it to the rim of the volcano and for a completely new awe-inspiring scenery to unfold before your eyes!

The next section is a bit tricky and you might want to go slow even if you are as excited as I was to get closer to the cliffs. Large smooth rocks are covering the trail, lined with small green bushes. The closer you get to the rim, the more gorgeous the view is! The trail transitions into a flat dirt path once again as you start making your way along the edge of the cliff. Halfway along the way, you would want to stop for a moment and take a glimpse of the glittering blue waters of Lake Calavera in the distance. You can truly appreciate this little natural haven from up here. Being on top of the cliffs, far away from the hustle and bustle of the city and soaking in the sun felt so refreshing!

We kept following the narrow path along the ridge though barely anyone makes it beyond this point. NOTE! If you are scared of heights or you are visiting with little children, this might not be a suitable trail for you! However, If you are seeking a little adventure for the way back down, this hidden path that nobody seems to take is a real gem! As you reach the very end of the ridge, you will see where the trail takes a left and significantly drops down towards the main path from before. The very few steps might be a bit tricky, but nothing is impossible. From this point, you will be able to see the flat easy path that you followed coming up winding beneath your feet. There are a few small walkways to choose from and I suggest taking the one that seems easiest to you. Of course, my husband chose the hardest and most adventurous way down! All of them will take you all the way back down to the base of Mount Calavera!

Lake Calavera is a 400-acre, man-made reservoir surrounded by deep green vegetation (even during the winter months). There are multiple trails to choose from and you can easily start from either side of the lake. The entire trail along the lake is a 3-mile loop, however, we only tracked slightly over a mile.

Once we came back to the bottom of the caldera, we followed a small path in between the trees – in the opposite direction. A lush green tree tunnel above the trail greeted us in this section of the hike. It felt almost magical walking through the forest with sun rays breaking through the treetops.

It was not long before we emerged from the vegetation and reached the much more spacious part of the trail. We saw a few signs which said “Main Trail” and we followed them along another easy flat path. This path kept weaving this way and that, slowly heading away from Mount Calavera and towards the East side of Lake Calavera. Regular glances of the peaceful blue waters through the greenery were lovely reminders that we are still relatively close to the lake. Despite being relatively flat and easy, this portion of the hike kept going up and down little mounds. Please note that thisis also close to where the official trail begins near Oak Riparian Park, so expect the path to be a bit more crowded here.

A wooden boardwalk marks the start of the next portion of the hike which takes you along the Northern side of Lake Calavera. Once again, you will notice the main trail splitting here and there with small walkways taking you even closer to the lake. We followed one of these to a small overlook area, which gave us a gorgeous view of the lake and the dramatic cliffs of the volcano in the distance. The tranquility and quietness accentuated by the soft quacking of ducks made this the perfect setting for a little break.

We could tell that we were approaching the end of the loop (where we started in the morning), as the trail kept getting wider and even more heavily trafficked. The exquisite scenery from the Northern side made us stop for a moment once again and take in the beauty of the lake and the rising Mount Calavera in the distance ahead. We wished there were some benches as this was an incredible view, and we wouldn’t have minded admiring a little longer.

Note: While there are multiple trails to choose from at Lake Calavera Preserve, you are not going to find many trail marks. We also did not see any benches along the trail, which would have been nice for a quick snack break! My husband highly recommends his favorite navigation app – Pokemon Go – for reliable paths around the Lake and Mount Calavera (I wish I were joking!).

Mount Calavera is definitely the more exciting and adventurous part of the preserve so I strongly recommend not skipping it – even if it requires a bit more hiking effort! Regardless, if you choose to make it all the way to the top or take just an easy jaunt along the reservoir, Lake Calavera is a must-visit when in Carlsbad!

I will be sharing even more hiking experiences and adventures in the new 52 in 52 series, so stay tuned! Also let me know if you have done the 52 hike challenge yourself! If not maybe you would want to join as well! 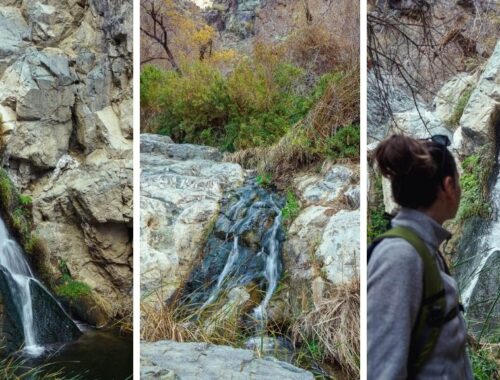 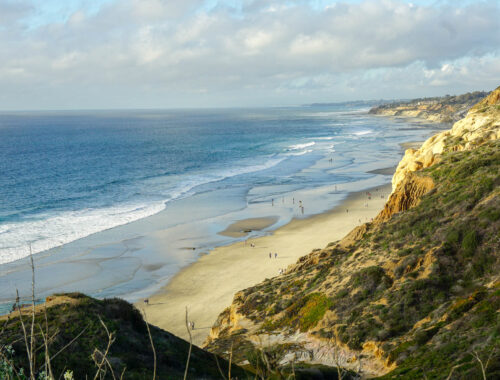 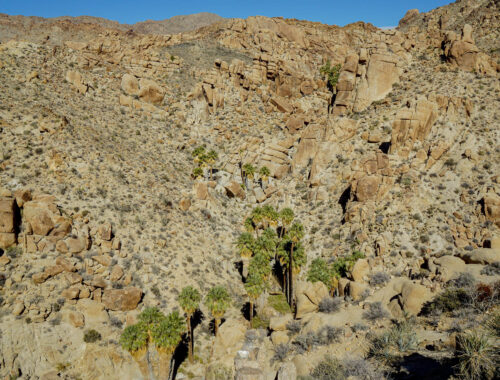